Halloween and All Souls' Day 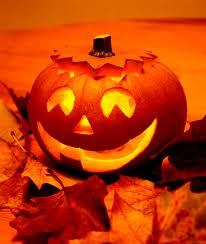 Halloween (or Hallowe'en) is an annual holiday observed on October 31, primarily in Canada, Ireland, the USA and the UK. It has roots in the Celtic festival of Samhain and the Christian holiday All Saints' Day, but is today largely a secular celebration.

The imagery of Halloween is derived from many sources, including national customs, works of Gothic and horror literature (such as the novels Frankenstein and Dracula), and classic horror films (such as Frankenstein and The Mummy) Elements of the autumn season, such as pumpkins, corn husks, and scarecrows, are also prevalent. Homes are often decorated with these types of symbols around Halloween.

Halloween imagery includes themes of death, evil, the occult, magic, or mythical monsters. Traditional characters include ghosts, witches, skeletons, vampires, werewolves, demons, bats, spiders, and black cats. Black and orange are the traditional Halloween colors and represent the darkness of night and the color of bonfires, autumn leaves, and jack-o'-lanterns.

Trick-or-treating is a customary celebration for children on Halloween. Children go in costume from house to house, asking for treats such as candy or sometimes money, with the question, "Trick or treat?" The word "trick" refers to a (mostly idle) "threat" to perform mischief on the homeowners or their property if no treat is given. In some parts of children still go guising. In this custom the child performs some sort of trick, i.e. sings a song or tells a ghost story, to earn their treats.

The practice of dressing up in costumes and begging door to door for treats on holidays dates back to the Middle Ages and includes Christmas wassailing. Trick-or-treating resembles the late medieval practice of souling, when poor folk would go door to door on Hallowmas (November 1), receiving food in return for prayers for the dead on All Souls Day (November 2). It originated in and , although similar practices for the souls of the dead were found as far south as . Shakespeare mentions the practice in his comedy The Two Gentlemen of Verona (1593), when Speed accuses his master of "puling [whimpering or whining] like a beggar at Hallowmas." The custom of wearing costumes and masks at Halloween goes back to Celtic traditions of attempting to copy the evil spirits or placate them, in Scotland for instance where the dead were impersonated by young men with masked, veiled or blackened faces, dressed in white. 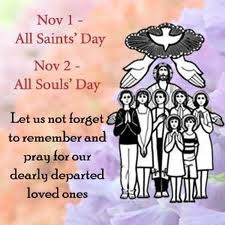 All Souls' Day commemorates the faithful departed. In Western Christianity, this day is observed principally in the Catholic Church, although some churches of the Anglican Communion and the Old Catholic Churches also celebrate it. The Eastern Orthodox Churches observe several All Souls' Days during the year. The Roman Catholic celebration is associated with the doctrine that the souls of the faithful who at death have not been cleansed from the temporal punishment due to venial sins and from attachment to mortal sins cannot immediately attain the beatific vision in heaven, and that they may be helped to do so by prayer and by the sacrifice of the Mass. In other words, when they died, they had not yet attained full sanctification and moral perfection, a requirement for entrance into Heaven. This sanctification is carried out posthumously in Purgatory.

Publicat per Mònica Subirats a 17:18