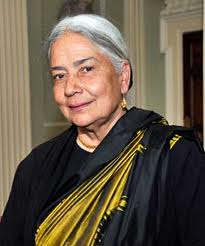 Born as Anita Mazumdar to a German mother, Toni Nime, and a Bengali businessman, D. N. Mazumdar in . She grew up speaking German at home and Bengali, Urdu, Hindi and English outside the house. She first learned to read and write in English at school and as a result it became her "literary language". Despite German being her first language she did not visit until later in life as an adult.

She was a student at Queen Mary's in and received her B.A. in English literature in 1957 from the . The following year she married Ashvin Desai, a businessman. They raised four children. Daughter Kiran was born in and spent her childhood years in , on . She recalls that as children they were taken to Thal (near Alibaug) for weekends, and this is where Anita Desai set her novel Village by the Sea .

She published her first novel in 1963, Cry The Peacock. She considers Clear Light Of Day (1980) her most autobiographical work as it is set during her coming of age and also in the same neighbourhood in which she grew up. In 1984 she published In Custody - about an Urdu poet in his declining days - which was shortlisted for the Booker Prize. In 1993 she became a creative writing teacher at Massachusetts Institute of Technology [5]). Her latest novel published in 2004, The Zigzag Way, is set in 20th-century .

Her novels include Fire on the Mountain (1977), which won the Winifred Holtby Memorial Prize, and Clear Light of Day (1980), In Custody (1984) and Fasting, Feasting (1999), each of which was shortlisted for the Booker Prize. In Custody was made into a film by Merchant Ivory productions. Her children's book The Village by the Sea (1982), won the Guardian Children's Fiction Award.

She is a Fellow of the Royal Society of Literature, the of Arts and Letters, , and Clare Hall, . Her most recent novel is The Zig Zag Way (2004), set in 20th century .

Anita Desai confesses that while she 'feels about as an Indian,' she thinks about it 'as an outsider'. Desai probably derived this point of view from her German mother, whom she aptly describes as carrying 'an European core in her which protested against certain Indian things, which always maintained its independence and its separateness.' Her oeuvre has explored the lives of outsiders within Indian society and, more recently, also within the West. Her fiction has covered themes such as women’s oppression and quest for a fulfilling identity, family relationship and contrasts, the crumbling of traditions, and anti-Semitism. The Eurocentric and social biases that are sometimes detected in her fiction, therefore, may be more productively read as the result of the author’s focus on uprooted and marginalized identities. Tellingly, the literary example which Desai set off to emulate was that of another migrant to India of German origins: Ruth Prawer Jhabvala. Though some critics detect a Western disdain for Indian social customs in her fiction, ultimately Desai’s literary world is not sharply divided along Western and Eastern lines. On the contrary, ever since her novel Baumgartner’s (1987), East and West have been treated as mirror images of each other.

Publicat per Mònica Subirats a 10:26