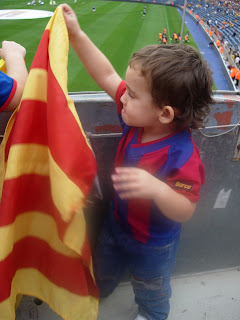 My godson Guillem is 5 years old. He's a real Barcelona supporter, and he likes all kinds of sports. He knows by heart all the names of the Barcelona players, and he's precisely keen on the goalkeeper, Víctor Valdés, because Guillem also likes being a goalkeeper, in fact he says that he is the best goalkeeper in the world!

Guillem lives in Campredó with his parents, his older sister, Rosa, 7, and one of his grandfathers. And in the summer, he loves swimming in their swimming pool!

He likes playing with his computer very much and watching football matches on the Internet.

He likes learning languages and he speaks Catalan, a bit of Italian and some English, too. He has studied English since he was three and he enjoys the lessons and the English games very much.

He's a very nice boy, but sometimes he is a bit naughty. Then, he apologizes and he behaves well again!

He loves both his dad and his mummy very much, but he is Mummy's boy, although he says he loves everybody as much as his mum!

He also loves being given presents! He adores it! And especially if his presents are related to Barcelona Football team! And most of all if these presents are given to him by his grandparents! He has a special relationship with his grandfather Daniel, but of course he loves his grandmother Angelita very much as well.

I love him! He's so nice and so intelligent! And he doesn't like being told off, just as his dad used to do when he was Guillem's age!
Publicat per Mònica Subirats a 22:52