"ODE TO A NIGHTINGALE" by JOHN KEATS 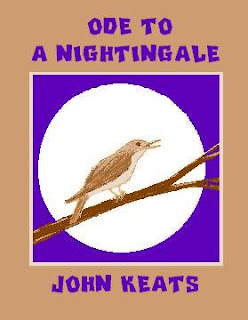 Keats composed this while staying at a friend's house, north of London. Every evening a nightingale would sing outside his window, and the bird's singing caused Keats to reflect on sad memories.
With "Ode to a Nightingale" Keats's speaker begins his fullest and deepest exploration of the themes of creative expression and the mortality of human life. In this ode, the transience of life and the tragedy of old age ("where palsy shakes a few, sad, last gray hairs, / Where youth grows pale, and spectre-thin, and dies") is set against the eternal renewal of the nightingale's fluid music ("Thou wast not born for death, immortal bird!"). The speaker reprises the "drowsy numbness" he experienced in "Ode on Indolence" , but where in "Indolence" that numbness was a sign of disconnection from experience, in "Nightingale" it is a sign of too full a connection: "being too happy in thine happiness," as the speaker tells the nightingale. 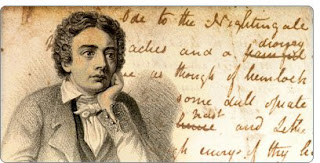 Hearing the song of the nightingale, the speaker longs to flee the human world and join the bird. His first thought is to reach the bird's state through alcohol--in the second stanza, he longs for a "draught of vintage" to transport him out of himself. But after his meditation in the third stanza on the transience of life, he rejects the idea of being "charioted by Bacchus and his pards" (Bacchus was the Roman god of wine and was supposed to have been carried by a chariot pulled by leopards) and chooses instead to embrace, for the first time since he refused to follow the figures in "Indolence," "the viewless wings of Poesy."
The rapture of poetic inspiration matches the endless creative rapture of the nightingale's music and lets the speaker, in stanzas five through seven, imagine himself with the bird in the darkened forest. The ecstatic music even encourages the speaker to embrace the idea of dying, of painlessly succumbing to death while enraptured by the nightingale's music and never experiencing any further pain or disappointment. But when his meditation causes him to utter the word "forlorn," he comes back to himself, recognizing his fancy for what it is--an imagined escape from the inescapable ("Adieu! the fancy cannot cheat so well / As she is fam'd to do, deceiving elf"). As the nightingale flies away, the intensity of the speaker's experience has left him shaken, unable to remember whether he is awake or asleep. 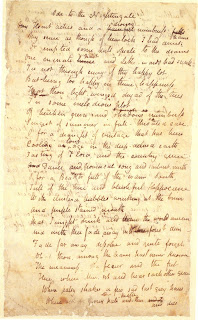 In "Indolence," the speaker rejected all artistic effort. In "Psyche" he was willing to embrace the creative imagination, but only for its own internal pleasures. But in the nightingale's song, he finds a form of outward expression that translates the work of the imagination into the outside world, and this is the discovery that compels him to embrace Poesy's "viewless wings" at last. The "art" of the nightingale is endlessly changeable and renewable; it is music without record, existing only in a perpetual present. As befits his celebration of music, the speaker's language, sensually rich though it is, serves to suppress the sense of sight in favor of the other senses. He can imagine the light of the moon, "But here there is no light"; he knows he is surrounded by flowers, but he "cannot see what flowers" are at his feet. This suppression will find its match in "Ode on a Grecian Urn" , which is in many ways a companion poem to "Ode to a Nightingale" . In the later poem, the speaker will finally confront a created art-object not subject to any of the limitations of time; in "Nightingale," he has achieved creative expression and has placed his faith in it, but that expression--the nightingale's song--is spontaneous and without physical manifestation.
Publicat per Mònica Subirats a 10:01