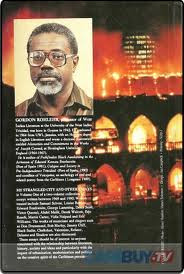 "I am a murderer; I wring words by the rough of their necks".

He deals with language as an instrument of control and manipulation.

The poem is conceived as a long narrative dialogue that takes place in a court of justice, where two speakers discuss the nature of language:

- It begins with the voice of the accused that is summoned to confess all the crimes committed against the purity of language, ironically his crime consists of speaking in a linguistic variety that departs from the standard.

- He feels guilty for something that forms part of his identity and cultural background.

The judge appears as ominous and domineering:

- He begins demarcating who holds the power position and exposing the offences.

- He deprecates all the departures from the rule that might originate in the Car vernacular varieties, and addresses his interlocutor as "Rude Boy Q", a reference to the author's surname.

- He blames the accused of trading with languages that corrupt the essence of English:

· This is ironic because the only "word merchants" were the colonising nation that established their own languages perforce and sought to relegate local tongues to a marginal position.

· For him, the "big models" can only be found in EUR and , the best exponents of a respectable and long-standing tradition and lineage. And he mentions several cultural benefactors, most of them only distinguished by their conception of culture as exclusively money-oriented.

- He concludes by defending the valuable task undertaken by Br and A dialectologists, psycho-linguists and politicians in the consolidation of English as the most influential language worldwide (paradoxical because he has insisted on his rejection towards all the varieties of English).

The consistent use of personification enables the author to endow words with human attributes: letters and phonemes can be stabbed, bombed, lynched and violated as if they were human beings.

"We speak because when the rain falls in the mountains the river slowly swells".

It has a strong political component affirming the people's need to:

- challenge the dictates imposed on them by foreign agents.

Speech means to be capable of:

- standing instead of kneeling down.

She takes for granted that: the speaking ability is inherent to the human being, nobody can be forbidden this faculty:

- She compares speech with all those natural phenomena that take place daily, encouraging her fellow citizens to:

· leave behind that conformist attitude

· and seek to regain a voice that had been lost.

- Uttering words after so many years of forced silence is somehow an act of rebellion.

- Language can enable the Car population to depart from the "plan" designed by the empire, establishing a correlation between speaking and dreaming, essential mechanisms to do away with the imperial yoke.

She also rejects the fact that surviving implies going for alms and catching crumbs from the table of the coloniser.

Speaking can also allow to break away from the religious dogmas the coloniser seeks to impose and which only interfere in their own system of beliefs.

Only when the WI have done away with that feeling of fear will the imperial venture and its iconography eventually end. She identifies this day with dawn, symbolising the beginning of a new period of liberation for the WI people. This new will bring about the disappearance of all the remnants of colonialism and the subsequent rising of the workers, peasants and leaders.

The poem is sustained upon a series of antitheses that

- reveal the differences between coloniser and colonised.

- focus on the "Other" stressing the pronoun "we", which usually refers to the white, mainstream, civilised population, and "they" to the black, peripheral and savage natives.

Publicat per Mònica Subirats a 9:17