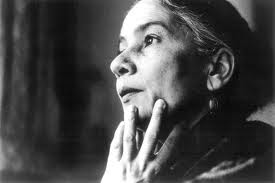 Desai shocks us near the end of her novel when she presents Nur's young wife's point of view in a letter to Deven, in which the woman claims that Nur married her because of her "gifts and abilities," not because of sexual entrapment as had been assumed throughout the novel. She challenges him to read her enclosed Urdu poems.

Deven's timidity prevents her defiant letter from gaining her acceptance in the world of Urdu poetry. Frightened of having to "enter that world on a mission of mercy or rescue," he tears up her poems. But her angry statements make the reader reevaluate what they previously had only seen through the eyes of a male character. By making women's frustration understandable, Desai subverts her book's primarily unsympathetic portrayals of women which turn out to have been Deven's -- not the author's -- perceptions.

But in fact, Desai does more than simply subvert a male society's attitude towards women, since she portrays a flawed Sita-like image in her main male character, not her female ones, who are too disillusioned and angry to want to fulfill self-sacrificing ideals. First of all, Deven suffers bitterly throughout In Custody because he has too weak a character and personality to refuse the burdens others place upon him. Second, whereas Nur's wife gains respect as a character by asserting her rights and abilities, Deven never manages such fiery rebellion. In contrast, he becomes noble at the end of the book by taking upon himself tremendous responsibilities: "He had accepted the gift of Nur's poetry and that meant he was custodian of Nur's very soul and spirit. It was a great distinction. He could not deny or abandon that under any pressure." Only as Deven decides to accept and endure whatever disasters befall him does he reach a kind of graceful inner strength: "Soon the sun would be up and blazing. The day would begin, with its calamities. They would flash out of the sky and cut him down like swords. He would run to meet them" 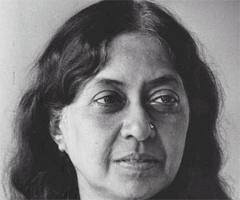 Kamala Das is a Kerala poet famous for her honesty. Her book 'My Story' created some controversy for its frank discussion of her search for love inside and outside marriage. She writes critically of the traditional conservative society in which she lives.

Born in 1934, she had an early inclination towards the literary life, inspired by her uncle Nalapat Narayan Menon, a prominent writer. Her mother, Nalapat Balamani Amma, was also a well-known Malayalam poet. She was educated at home and married at 15 to K. Madhava Das, who was many years older. She bore her first child at 16, but her husband was often in a fatherly role to the children as well as Das herself. He encouraged her to associate with people of her own age, and also encouraged her writing. He was invariably proud of her accomplishments, even when they were controversial.

Kamala Das is bilingual, and writes easily in Malayalam (under the name Madhavikutty) and English. Her autobiographical novel, My Story, shocked mainstream Kerala with its candid accounts of her encounters with men. As an artist, her paintings included nudes.

In 1999 she converted to Islam, an action she said she had been contemplating for many years.

She is also known as a feminist writer. She says "I don't think any genius can survive caught in the machine of formal education." A Childhood in Malabar. 2005

Publicat per Mònica Subirats a 9:12