"If I did tell she hold this gold of sundizzy tonguelicking juicy".

The racial boundaries established by the coloniser triggered the creation of a series of clichés and stereotypes whose purpose was to undermine the dignity of the native.

The poem combines eroticism with a subtle examination of this dividedness and seems to conclude that, in spite of these socio-cultural and ontological differences, it is possible to fins a realm in which to share common experiences:

- both the speaker and the English girl are trespassing these racial borders,

- and the latter agreeing to eat it.

Here, every word can be interpreted from multiple perspectives, thus it can be understood as a means to illustrate the sexual initiation of an English girl.

The act of eating a Car fruit, so typical in ordinary Car life, turns out to be a mystery for the girl who does not know how she is supposed to eat the mango:

- Her asking for guidance emphasises the cultural disparity between:

- The girl eventually accepts to bite the mango, symbolically analysed as the breaking of the boundaries that separate these two world views.

- the distance that still exist between the 1st and 3rd Worlds

- and the lack of interest in getting to know more about cultures that are ignored by the W:

· after eating the mango, she asks for a handkerchief so that she can wipe its juice from her sticky hands.

· In the speaker's culture, nobody would wash his hands because that does not form part of their background.

· He wants the girl to lick her fingers, inviting her, thus, to partake of his customs. 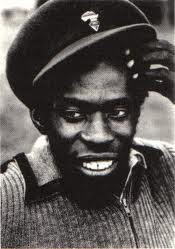 The poem can be inscribed in the "protest poetry" tradition, the best means to portray:social injustice,political chicanery,racial violence. It means to reflect on the black experience as a succession of misfortunes and frustrations for their fate is to be subdued to the white will. It means to allude to education and culture in an "all black" context and to black music as the marks of the AA and Acar identity. He draws on lexical repetition to create a surprising ending: black + noun structure, reinforces the ironically frustrating twist at the end of the poem, where he reveals the real situation of the black population.


Publicat per Mònica Subirats a 8:52