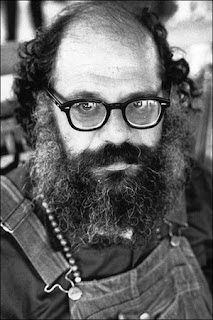 The poem consists of three parts, with an additional footnote.

Called by Ginsberg, "a lament for the Lamb in America with instances of remarkable lamb-like youths," Part I is the best known, and communicates scenes, characters, and situations drawn from Ginsberg's personal experience as well as from the community of poets, artists, political radicals, jazz-musicians, drug-addicts, and psychiatric patients whom he encountered in the late 1940s and early '50s. These people represent what he considers "the best minds of his generation", an ironic and shocking declaration since, in what members of the Beat Generation considered the oppressively conformist and materialistic 50's, those Ginsberg called "best minds" were unrepresented outcasts, what the middle class might consider "worst minds". The shocking aspect of the poem was further enhanced by Ginsberg's frank descriptions of sexual, often homosexual, acts. Most lines in this section contain the fixed base "who". Ginsberg says in "Notes Written on Finally Recording Howl", "I depended on the word 'who' to keep the beat, a base to keep measure, return to and take off from again onto another streak of invention".

Ginsberg says that Part II, in relation to Part I, "names the monster of mental consciousness that preys on the Lamb". Part II is a rant about the state of industrial civilization, characterized in the poem as 'Moloch'. Ginsberg was inspired to write Part II during a period of peyote-induced visionary consciousness in which he saw a hotel façade as a monstrous and horrible visage which he identified with that of Moloch. Moloch is the biblical idol in Leviticus to whom the Canaanites sacrificed children. Ginsberg intends that the characters he portrays in Part I be understood to have been sacrificed to this idol. Moloch is also the name of an industrial, demon-like figure in Fritz Lang's Metropolis, a film which Ginsberg credits with influencing "Howl, Part II" in his annotations for the poem (see especially Howl: Original Draft Facsimile, Transcript & Variant Versions). Most lines in this section contain the fixed base "Moloch". Ginsberg says of Part II, "Here the long line is used as a stanza form broken into exclamatory units punctuated by a base repetition, Moloch".

Part III, in relation to Parts I and II, is "a litany of affirmation of the Lamb in its glory" according to Ginsberg. It is directly addressed to Carl Solomon, whom Ginsberg met during a brief stay at a psychiatric hospital in 1949; called "" in the poem, it was actually Columbia Presbyterian Psychological Institute. This section is notable for its refrain, "I'm with you in ," and represents something of a turning-point away from the grim tone of the "Moloch"-section. Of the structure, Ginsberg says Part III is, "pyramidal, with a graduated longer response to the fixed base".

The closing section of the poem is the "Footnote", characterized by its repetitive 'Holy!' mantra, an ecstatic assertion that everything is holy. It can be read as the antithesis of Part II. Ginsberg says, "I remembered the archetypal rhythm o 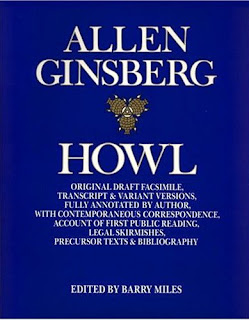 f Holy Holy Holy weeping in a bus on Kearny Street, and wrote most of it down in notebook there ... I set it as Footnote to Howl because it was an extra variation of the form of Part II".

The frequently quoted (and often parodied) opening lines set the theme and rhythm for the poem:

I saw the best minds of my generation destroyed by madness, starving hysterical naked,

dragging themselves through the negro streets at dawn looking for an angry fix;

to the starry dynamo in the machinery of night.

Ginsberg's own commentary discusses the work as an experiment with the "long line". For example, Part I of the poem is structured as a single run-on sentence with a repetitive refrain dividing it up into breaths. Ginsberg said, "Ideally each line of Howl is a single breath unit. My breath is long - that's the measure, one physical-mental inspiration of thought contained in the elastic of a breath".

Publicat per Mònica Subirats a 10:44