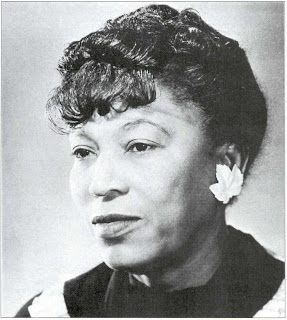 Zora Neale Hurston was born in , a small town inhabited primarily by African-Americans. Her mother died shortly after her birth leaving Hurston in the care of her father, who quickly married a woman who sent little Hurston to school in , providing her with her first glance at racial segregation. Hurston left school due to financial difficulties and family problems which led her to stay with her mother's friends. At age fourteen, she worked as a maid to earn money for her education but failed miserably. Hurston's first successful employment was with the Gilbert and Sullivan repertory company, which offered Hurston travel and reading time. When that job was exhausted, she worked as a waitress to get through school in . She later attended supported by employment with a clergyman. In the fall of 1918-1920 Hurston attended where she met and fell in love with Herbert Sheen, who she eventually married--a marriage that lasted only four years.

Hurston's literary work captured the attention of Charles Spurgeon Johnson, founder of Opportunity Magazine. Based on the merit of her work, he invited Hurston to come to , which was her introduction to the Harlem Renaissance and which provided her with inspiration and opportunity in the literary world of African-Americans. Hurston's "Sweat" and "The Gilded Six Bits" were influenced by Hurston's life within the Harlem Renaissance.

Hurston's "Sweat," written in 1926, portrays two primary influences in her life. The first influence was Hurston's childhood town of and its economic situation. Hurston's town was ideal for a young African-American girl in the early nineteenth century, providing a safe haven from restrictions of race. The town also preserved its African-American culture and history due to its seclusion from .

"Sweat" reveals much of Hurston's nostalgic memories, though it primarily focuses on Eatonville's economic dependence on the neighboring town of . When Hurston was growing up many of 's inhabitants were white snow birds with money. Like Delia in "Sweat," African-American residents of Eatonville made daily pilgrimages across the rail road tracks to clean houses, tend gardens, cook meals and watch the children of . Hurston took advantage of this situation by working as a maid, though she failed by refusing to behave humbly and fought off sexual advances by her employers.

"Sweat" is influenced not only by Hurston's childhood town but also by her relationship with her employer, Fannie Hurst. Hurston met the writer Hurst at 's award dinner, May 1, 1925, one year prior to the writing of "Sweat." hired Hurston as a live-in secretary. Hurston felt dependent on Fannie Hurst's white patronage for recognition, much like Delia did in "Sweat," and saw her patron as a restriction to her art.

The "Gilded Six Bits," written in 1933, was influenced by Hurston's anthropological 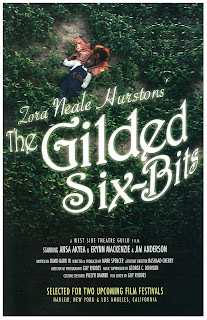 studies and her rocky relationships in marriage. Hurston first began her anthropological studies after she graduated with a B.A. Degree in 1928, from . Hurston had been advised to take anthropology classes to broaden her education. Dr. Franz Boas, a professor of anthropology at Barnard, took Hurston under his wing and "made an anthropologist out of her," giving here analytical tools for returning south to gather black folklore. For this journey, which began in late Febuary 1927, Hurston was awarded a fellowship to study and collect southern folklore, a unique opportunity to compare her new home of to her old home of Eatonville . "The Gilded Six Bits" focuses on this comparison, demonstrating that the promises of a city are often gilded and that life in quaint rural folk ways is life with value and strength.

Hurston's difficulty in marriages was another contribution to Hurston's story. Hurston was married and divorced twice. Her first marriage, on May 19, 1927, was to Herbert Sheen, a jazz pianist, singer, and medical student; the two divorced shortly after on July 7, 1931. Hurston's rocky marriage occurred just prior to the writing of "The Gilded Six-Bits" which portrays a marriage replete with infidelity and hatred. In "The Gilded Six-Bits," Missie's infidelity tests the strength of the marriage with Joe, a marriage which ultimately weathers the storm. Perhaps the marriage in "The Gilded Six-Bits" is spared because, despite Hurston's hardships in her own marriages, she saw marriage as an important institution capable of providing possibilities in life.

Hurston's stories "Sweat" and "The Gilded Six-Bits" are influenced by her life as an African-American woman in the Harlem Renaissance. The greatest influence in Hurston's life for "Sweat" was the economical situation in her small childhood town of and her relationship with her patron, Fannie Hurst. "The Gilded Six-Bits" was influenced by her educational endeavors in anthropology and her unsuccessful marriage with Herbert Sheen.

Publicat per Mònica Subirats a 10:03