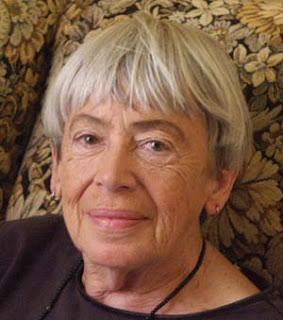 The use of language to name the world seems to have two sides. On the one hand, things are given names as an expression of intimacy and respect; and on the other, they are given names to create distance and separation. In the story, "She Unnames Them," barriers are broken down as the names for animals are taken away.

Adam (the first man in the world according to the Bible), was instructed by God to name the animals. Eve takes all the names back because they were either wrong from the start or they went wrong. As she does this, the barriers between herself and the world are dismantled.

Although the story is very short, it took me a little while to realize that Eve is actually the one telling the story of how she frees the animals of their name. According to her, most of the animals "accepted namelessness with the perfect indifference with which they had so long... ignored their names."

Order and chaos are related to and dependent on each other. The clear cut distinction between them is man made and an illusion. Society uses order to regulate all aspects of the world from nature to personal lives, while chaos allows for open mindedness and also provides an explanation for certain aspects of the world. This can be seen in science, theology, music, language, and imaginative play.

Science is rational, logical, and orderly. It has the ability to break apart complex systems into simpler ones described by theories ad equations. This is seen in the description of the planets' orbits, evolution, and Newton's laws. Scientists have a thirst for knowledge and seek understanding about the world around them. Their methods are clear and proper ,such as the popular scientific method. Yet even with all their rules and equations they have come to realize the universe is not as predictable and orderly as it seems.

In the story, the conclusion to Adam and Eve's relationship seems very interesting. The importance of Eve unnaming the animals is enabling her to become closer to nature and ultimately forsake her domesticity. However, there is also the gesture of woman reclaiming language. According to the Bible, man was created first, then the animals and then woman. Man was allowed to name the animals, thus granting man a power of language that woman was not given. By unnaming the animals, Eve in this story seems to reclaiming that power in a way. Now, she feels closer to them than "when their names had..."

Judging by the descriptions of the other short stories in the collection in which this story was published, the importance of Eve unnaming the animals, at least for Le Guin, is enabling her to become closer to nature and ultimately forsake her domesticity. However, there is also the gesture of woman reclaiming language. According to one of the creation stories (the one generally favored), man was created first, then the animals and then woman. Man was allowed to name the animals, thus granting man a power of language that woman was not given. By unnaming the animals, Eve in this story seems to reclaiming that power in a way.

Man created language and that language created a hierarchy, a separation between humans and animals, animals and other animals.

Between the humans, “talk was getting [them] nowhere.” And, though it isn’t made explicitly clear in this story (though a hierarchy in the animal realm is explicit), language creates a hierarchy between men and women. By disassembling Adam’s language and joining the animals, Eve effectively renounces the hierarchy of the human realm and joins her newly created, classless society.

When we get to know someone or something, well we sometimes use a special name, a nickname. A nickname is really a name over and above the name that something or someone already carries. i would say that, with the nick name we indicate our special relation to something or someone. We make our world knowable by giving names, or let us say assigning labels to them. However, nicknames and proper names serve a special function. In fact giving names is a most peculiar act. In order to explore the living relations that we maintain with the world we first need to un- name things. In the short story "She Unnames Them" the science fiction author Ursula Le Guin hints at what happens in un-naming. For me Ursula in her let's say story or whatever you say strives to say that after the unnaming she had discovered with surprise how close she felt to the creatures around her. They seemed far closer than when their names had stood between myself and them like a clear barrier: so close that my fear of them and their fear of me became one and the same fear. i don't know how much are you going to agree with my ideas. sometimes we need to hide our names to get more and detailed information about something or to protect ourselves from something. at the end of my word i would say that reflecting on words or names helps us to realize how closely related language is to thinking and to our ways of being in the world. i have two questions to you. But what occurs when we unname things is a question that is rarely asked. Can we truly erase the words we give to the things that are important to us?

it is in the retelling of our most essential myths that we learn the truths of our existence: "Myths are one of our most useful techniques of living ... but in order to be useful they must ... be retold." The re-telling, she adds, must include a seeing differently, so that we can be aware of the ways in which the old narratives have formed our ability to see and to understand others, the world, and ourselves.

In their own way, contemporary women writers are attempting to revise the more traditional interpretation of Eve, and to challenge the views of women that have grown from it. Many of the poems from recent years postulate an Eve much like Trible's, wise and self-possessed, with little patience for an Adam who is blinded by his self-centeredness and lack of ambition. She sees herself as part of the natural world, her wisdom a natural extension of its development. These writers also present an image of God that is more experimental, often suggesting that God did not realize what could happen once humanity was created.

Ursula Le Guin's Adam is also lost in the abstractions of his mind, in "She Unnames Them"; while Eve prepares to leave Eden, Adam, content that his naming has settled each being into a comfortable and forgettable niche, fiddles with some invention. Eve first "unnames" the animals and, like Adam and Eve of Clifton's early poem set before the naming, discovers that she and they have regained some lost community, which she says was "more or less the effect I had been after."

Eve then returns her own name to Adam: "You and your father lent me this--gave it to me, actually. It's been really useful, but it doesn't exactly seem to fit very well lately. But thanks very much. It's really been very useful," she says again, as if to soften the blow of its uselessness. Adam pays no attention, says "Put it down over there, OK?," convincing Eve that her actions were right: "One of my reasons for doing what I did was that talk was getting us nowhere." For Le Guin's Adam, language has become a barrier, relegating Eve, the animals, and the garden itself to generic functions in service to his needs; he cannot see them as individual selves.

Eve dawdles, hoping he will wake up and hear her, but she finally leaves, saying, "Well, goodbye, dear. I hope the garden key turns up." Adam replies absently, "OK, fine, dear. When's dinner?". Le Guin's Adam has not really understood the garden, has not got the Key to paradise--to communion with the animals or with Eve--or, most likely with himself. He continues "fitting parts together" but misses the whole point of creation.

Le Guin "imagines a new Eve redefining and thereby liberating Adam's world." Eve "leaves the oppressively enclosed Garden of a patriarchal vocabulary," reclaiming the right of all creatures to name themselves according to their own natures, and begins her own, distinctively female, creation story. Leguin presents an Eve who comes to know and take on her power, from within what seems to be her weakness.

The women writers examined here have begun to re-imagine the Genesis creation myths, correct misinterpretations, and change the point of view so that "the drama of history," as Phillips calls it, will likewise change, so that "our reality can be narrated," in Le Guin's words, and we can all, male and female attain "spiritual wholeness." Their presentations of Eve display the strength and self-knowledge that many women, like Plaskow and Christ, found lacking in the works they studied in the 1970's, and demonstrate that women have begun to reclaim the heritage of their faith and to find in them a source of source of stregnth and encouragement in their own personal spiritual journeys.

Publicat per Mònica Subirats a 8:54