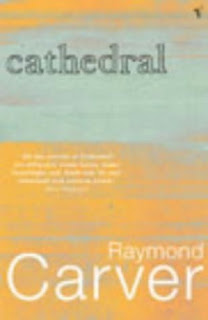 Raymond Carver’s short story, “Cathedral,” portrays a story in which many in today’s society can relate. We are introduced from the first sentence of the story to a man that seems to be perturbed and agitated. As readers, we are initially unsure to the reasoning’s behind the man’s discomfort. The man, who seems to be a direct portrayal of Raymond Carver himself, shows his ignorance by stereotyping a blind man by the name of Robert, who has come to stay with he and his wife. From the very beginning, Carver shows his detest for Robert but over the course of the story eases into comfort with him and in the end is taught a lesson from the very one he despised.

The story begins with a description of the relation’s between he, his wife and Robert. It is unveiled that Robert employed Raymond Carver’s wife, whose name is never stated, ten years previous by having her read reports and case studies to him since his blindness would not permit him to do it himself. She hadn’t seen him since those days but “she and the blind man kept in touch. They mailed tapes and sent them back and forth.” The story also is set up by briefly describing Carver’s wife’s past relations with her first husband. Their past marital troubles seem to be a main basis for the wife’s and Robert’s extended contact. After this background history, the story then jumps into the present with the Blind man on his way to stay for a night.

The blind man is invited to stay with the Carver’s by Raymond’s wife for he has just been through the death of his own wife and is now alone. Even this being the case, Raymond Carver’s distaste for the blind man is evident from the first paragraph on. “I wasn’t enthusiastic about his visit. He was no one I knew. And his being blind bothered me.” Carver’s distaste for Robert is blatantly apparent even subsequent to his arrival at their home. It also becomes quite clear that his wife disapproves of his attitude toward Robert and fails to see how he could be so self-centered. “My wife finally took her eyes off the blind man and looked at me. I had the feeling she didn’t like what she saw. I shrugged”

The other emotion highly present from the beginning is that of the attitude of Robert. We are introduced to what appears to be a quick witted and pleasant man, especially considering the recent death of his wife. His cheerfulness is established by his referring to Carver as “Bub” (509) within the first minutes of his arrival. This gesture shows how comfortable Robert is in the setting and also establishes the strong difference between the personality differences of he and Carver. This also creates the main conflict Carver faces in the story in trying to look past his stereotypes and jealousies toward Robert and accepting his company.

Carver’s initial views of Robert are indeed evident for not only does he seem jealous but he goes as far as to stereotype Robert due to his blindness. “He also had a full beard. But he didn’t use a cane and he didn’t wear dark glasses. I’d always thought dark glasses were a must for the blind.” (509) This statement shows the author’s ignorance and seems to be just another attempt to find an attribute not to like. He later even refers to Robert’s eyes as “Creepy.” The blind man still, though he probably senses Carver’s distaste for him proceeds to be upbeat and try his best to comfort him with his presence.

After a large dinner that night the story moves on to the living room where the three are relaxing before heading to bud. They make small talk, smoke, and watch television. By this point in the story, Carver seems to become somewhat more relaxed to the thought of the blind man in his home. The wife soon nods off and the two men are left briefly to themselves. Robert again tries to ease the discomfort of Carver by making conversation, “I’ll stay up until you’re ready to turn in.”, the blind man says. “We haven’t had a chance to talk. I fell like me and her (the wife) been monopolizing the whole evening.” It is at that point for the first time Carver shows some sense of compassion. “That’s alright,” he says, “I’m glad for the company.” The two then focus their attention to the television and some middle age show about cathedrals. It is this show from which the author gets the name of this short story, “Cathedral”. It also is relevant because it gives the blind man the opportunity to share with Carver his state of mind.

The blind man sees the TV show as a way for him to express his views to Carver. After inquiring into the show, Robert asks Carver to simply explain what the Cathedral’s look like. Carver does this but soon realizes that he is not doing a very good job. “I’m not doing so good am I.” This doesn’t work so Robert then asks the author if would mind drawing one with him. Carver agrees and leaves to gather supplies. Before long, he returns and they begin their project. We at this point the strong change in interaction between the two characters. The blind man diligently places his hand on that of Carver and they draw, together. The two are intently drawing the cathedral when Robert asks Carver to keep drawing but with his eyes closed too. He obeys and continues this is the climax of the story for Carver now briefly gets a glimpse of what it is like to live with the ailment of blindness. He is temporarily awed at the feeling for it is one he has obviously never experienced. “It’ really something”, he says.

Although it took this lesson, Carver now seems to understand, even if only for a fleeting moment, his own prejudice and feels compassionate with Robert. He begins the story with a quick judgment but ends with a lesson that we can all learn from. The two gentlemen appear seemingly different and in the beginning but learn form one another and in the end grow to indeed appreciate one another. It seems ironic though that although Robert rendered the physical ailment, we see Carver too was blind to many things.

\In “Cathedral,” for instance, the nameless narrator speaks in clipped, cursory, chopped sentences. As we witness the way he sees and understands, we infer some character traits: his attitude is insecure, arrogant, insolent, out of touch, insensitive, inarticulate, lacking self-awareness. There are many examples in the story where this is borne out. This first person narrator betrays himself. His own words implicate him, revealing how biased, ignorant, and insensitive he is. Those same words also reveal how lonely, aloof and in need of human contact he is.

Carver shuttles from present action (the plot concerning the actual visit) to the back story. The action moves from present (the narrator’s present situation with his wife and the imminent visit of Robert) to past (the story of how his wife became acquainted with Robert, her life before the narrator, her suicide attempt and divorce, Robert’s marriage to Beulah and her death). We gradually assemble a picture of the narrator’s habitual lifestyle: his drinking and drug usage, his TV watching habits, his lack of enthusiasm for his marriage and his job, and the lack of intimacy in his life.

Carver employs some subtle foreshadowing early in the story, describing how the narrator’s wife writes poems after important events in her life. This prefigures the story’s epiphanic ending and how he will come to write the story we are reading, which attempts to describe a very meaningful scene in his life.

In “Cathedral”, Raymond Carver, the author, illustrates that salvation lies in human contact and connection. At the beginning of the story it was obvious that the narrator (who was also the husband) was very lonely. His relationship with his wife was poor as she questioned whether he really loved her especially when he didn’t want her to invite her friend Robert (the blind man) whom she really cared about. “’If you love me,’ she said, ‘you can do this for me. If you don’t love me, okay.” Most likely he felt threatened by Robert especially since she told Robert about him and he never met Robert before. He also didn’t have close relationships with other people. “’You don’t have any friends,’ she said.”