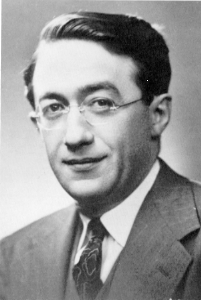 During the Second World War, Klein published two more books, Poems and The Hitleriad, both in 1944. Poems developed ideas forecasted in Hath Not a Jew but also reflected Klein's anxieties over current events and the plight of Jews in the wake of the Holocaust. Poems such as " ," "Meditation Upon Survival," and "Elegy" were thoroughly contemporary accounts of persecution and suffering with which Klein, despite his relative safety in , deeply sympathized. The Hitleriad was a very different work, a mock epic written in a satricial style reminiscent of Alexander Pope in such works as The Dunciad. In it, Klein attempted to satirize Adolf Hitler and his Nazi cohorts, although later critics often noted that the inescapable bitterness of the subject caused Klein's humorous intentions to run ary.

Klein's greatest achievement as a poet came in 1948 with the publication of The Rocking Chair and Other Poems. The book earned Klein a Governor General's Award in poetry and sold in numbers far exceeding the norm for a book of Canadian poetry. The success of the book owed much to Klein's new-found focus on domestic Canadian subjects, particularly the culture of French Canada, which Klein, fluent in French and sympathetic to their minority status in , understood better than most English-Canadian writers of his day. Along with the oft-anthologized title poem, "The Rocking Chair," a poem that uses the chair in a rural Quebec house as a synecdoche of French-Canadian heritage, the book included such poems as "Lookout: Mont Royal," "Grain Elevator," and "The Cripples," all of which showed Klein at the height of his creative powers and survived long after as lyrical encapsulations of specific aspects and locations of Montreal. A lengthy elegy at the end of the book, "Portrait of the Poet as Landscape," reflected Klein's indignation at the general indifference of the Canadian public to its own literature. Much of Klein's verse (Hath Not a Jew, 1940; Poems, 1944) was infused with Jewish images and ideas. In The Hitleriad (1944) he vented his spleen against the Nazis. His last and finest collection, THE ROCKING CHAIR AND OTHER POEMS (1948), is a satirical portrayal of Québec. His short allegorical novel The Second Scroll (1951) was based on his 1949 journey to Europe, and . Klein also published many newspaper articles, stories, book reviews and translations from Hebrew and Yiddish. His work is remarkable for its linguistic exuberance, wit, learning and moral fervour. Klein has rightly been called the "first contributor of authentic Jewish poetry to the English language." His writings articulate the feelings of a generation that witnessed the destruction of European Jewry and the fulfilment of the Zionist dream. Despite his protestations, Klein is still largely remembered as a Jewish poet — and not without justification. As both a person and an artist, he was deeply in love with the heritage he received from his parents and from his teachers, a fact fittingly reflected in his nostalgic recollections of his childhood in the once heavily Jewish Montreal neighborhood surrounding Saint Lawrence Boulevard. His poetry dealt with cultural synthesis and the problem of expressing one culture in the language of another.

But while much of Klein’s writing did, in fact, take Jewish themes as its subject, his quest for general literary acceptance was also fulfilled. As delegates at a recent international conference on Klein indicated, his contributions to Canadian and modernist literature went beyond the Jewish content of his poetry.

The most enduring part of Klein’s legacy is undoubtedly his 1948 collection, “The Rocking Chair and Other Poems,” which received ’s prestigious Governor General’s Literary Award. The collection dealt not with Jewish subjects but with the and its people. While many of the poems are written in Klein’s frequently complex style, such as the multilingual homage to the city of , some of the collection’s most powerful pieces are simple and direct, such as Klein’s critical portrayal of nationalism in “Political Meeting,” or the rural nostalgia of the titular “The Rocking Chair.” The collection also includes what many consider to be Klein’s finest poem, “Portrait of the Poet as Landscape,” a haunting meditation on the fate of the poetic vocation in the face of modernity. Along with his acclaimed novel “The Second Scroll,” the poem represents the zenith of Klein’s literary career, though its allusions to paranoia and madness also foreshadow its author’s mental collapse in the mid-1950s and Klein’s ensuing retreat into silence and solitude for the final decades of his life.

Though Klein is celebrated today primarily for his foundational role in Canadian letters (The Quebec Writers’ Federation Prize for Poetry is named in his honor), he was a man of many talents, many interests and many occupations. By profession he was a lawyer, having studied law at the Université de Montréal, and for a few years he lived in the small mining town of , where he opened a modest legal practice. For two-and-a-half decades he was also the editor of the Canadian Jewish Chronicle, the English counterpart to the seminal Yiddish newspaper Der Kanader Adler. In his weekly editorials, Klein commented on such topics as antisemitism both at home and abroad, ’s involvement in the Second World War and Zionism, of which he was a life-long supporter. Though Klein’s artistic aspirations remained primarily poetic, the editorial position served as an important creative outlet for him and as a channel for his essays, reviews and translations of Yiddish and Hebrew works. His career also included a three-year stint teaching poetry at , two unsuccessful forays into federal politics under the banner of the socialist Co-operative Commonwealth Federation (later to develop into the New Democratic Party) and speaking engagements all over on behalf of the fledgling State of Israel.

While for the most part, Klein was able to reconcile his multiple activities and obligations, they eventually took a toll on his personal life as well as on his artistic sensibilities. In addition to his literary work, Klein was a longtime speechwriter and public relations consultant for business magnate Samuel Bronfman, head of the Seagram Company, and president of the Canadian Jewish Congress from 1939 to a 1942 journal entry, Klein lamented his role writing souvenir programs for philanthropic banquets.

As a socialist candidate he believed in the power of the people, and as a young rabbinical student in the power of God. But it was the power of language that fascinated him most of all, a power to which he gave lasting expression through his true vocation — poetry.

In "Political Meeting" A. M. Klein describes an orator addressing an anti-conscription rally in . The image of the sunflower seeds has the power to call up the complex mood of the poem, and, in particular, its ambivalent attitude to the Orator.

Klein's ambivalent attitude to the Orator, deep distrust mixed with fascination, even with a kind of admiration, comes through especially in the detail of the sunflower seeds.

The poetry of Abraham Moses Klein springs from the roots of a consciousness where Hebrew and legal lore have become strangely and exotically intermingled with Shakespeare and T. S. Eliot. Klein's passion for English literature was second only to his love for Judaism, and in each the feeling was supported by a refined and extensive scholarship. His early work is thronged with Elizabethan locutions, some appropriate in that they fit in with the rhetorical Jewish tradition, others embarrassing or painful. Shelley was an influence on the tone of his radical verse, Eliot and then Auden on its phrasing. Klein was a peculiarly conscious writer, and there can be few indeliberate or accidental reminiscences in his writing. He was for many years fascinated by Joyce, whose medieval mind was in some ways similar to his own; and Joyce's linguistic psychiatry—and pedantry—have certainly influenced Klein's autobiographical-mythical novel The Second Scroll. Certainly the finest poem in his Poems (1944), "In re Solomon Warshawer," owes much of its form and manner to Browning; and it is in no respect inferior to the liveliest of Browning's production in this mode. Lengths of time and spans of experience are condensed in the poem's two hundred lines, and the whole tradition of the persecuted is concentrated in the single figure of Solomon Warshawer…. Solomon is seen to represent not simply the Jewish but, in his striving and imperfection, the human race.

And, further, the desperation which screams through the poem is not just for intolerable suffering, but for the horror that it is his merely human life that has been selected for destruction, so that what should have above all been preserved by man is precisely what is selected for abolition. The fear and the horror, in fact, are for a universe revealing itself as fundamentally irrational. It is this fear of an insane world—something unspeakably horrible to a mind like Klein's … which agitates the poem most deeply.

Klein is a product of three rich and distinct traditions, all of which formed his mind and imagination, determined his response to time past and present, to place, and to religious and literary forms and values. As a consequence, his contribution to the Canadian mosaic reflects the same elements. His major contribution stems primarily from his presentation of Jewish experience, historic and present, with its inherent ideas and values. It is a unique contribution, reflecting the religio-cultural heritage of his people and his own deep, passionate attachment, his on-going concern.

Publicat per Mònica Subirats a 19:20