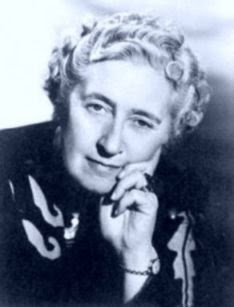 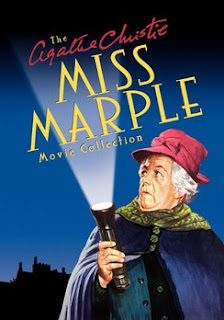 - - is a fictional character appearing in twelve of Agatha Christie's crime novels.

- - is an elderly who acts as an spinster amateur detective, and lives in the

- - She has been portrayed numerous times on screen, and is one of the most famous of Christie's creations.

- - when it comes to solving mysteries, she has a sharp logical mind, and an almost unmatched understanding of human nature with all its weaknesses, strengths, quirks and foibles.

- - In the detective story tradition, she often embarrasses the local "professional" police by solving mysteries that have them stumped.

- - Her character appearing first in The Murder at t 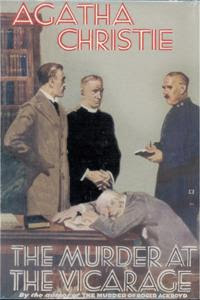 he Vicarage, is markedly different from how she appears in later books:

·This early version of Miss Marple is a gleeful gossip and not an especially nice woman.

·The citizens of St. Mary Mead like her but are often tired by her nosy nature and how she seems to expect the worst of everyone.

·In later books she becomes more modern and a kinder person.

·In her later years, Miss Marple has a live-in companion named Cherry Baker, who was first introduced in The Mirror Crack'd From Side To Side.

· not only because of her shrewd intelligence, but because St. Mary Mead, over her lifetime, has given her seemingly infinite examples of the negative side of human nature.

·No crime can arise without reminding Miss Marple of some parallel incident in the history of her time.

·Miss Marple's acquaintances are sometimes bored by her frequent analogies to people and events from St. Mary Mead, but these analogies often lead Miss Marple to a deeper realization about the true nature of a crime.

·Although she looks like a sweet, frail old woman, Miss Marple is not afraid of dead bodies and is not easily intimidated.

·She also has a remarkable ability to latch onto a casual comment and connect it to the case at hand.

- Miss Marple may thus be considered a female version of that staple of British detective fiction, the gentleman detective.

Christie wrote a concluding novel to her Marple series, Sleeping Murder, in 1940:

-She locked it away in a bank vault so it would be safe should she be killed in The Blitz.

-The novel was not published until shortly after Christie's death in 1976, some thirty-six years after it was originally written.

-While Miss Marple is described as 'an old lady' in many of the stories, her age is never mentioned.

-Excluding Sleeping Murder, forty-one years passed between the first and last-written novels, and many characters grow and age. An example would be the Vicar's son.

·At the end of The Murder at the Vicarage, the Vicar's wife is pregnant.

·In The Mirror Crack'd from Side to Side, it is mentioned that the son is now grown, successful and has a career.

-The effects of aging are seen on Miss Marple, such as:

·needing vacation after illness in A Caribbean Mystery.

·or finding she can no longer knit due to poor eyesight in The Mirror Crack'd from Side to Side. 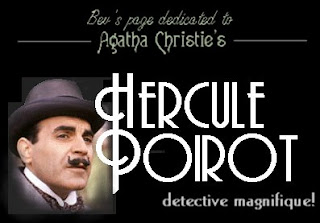 He was written in the Sherlock Holmes tradition –eccentric detective, stooge assistant, with a Lestrade-type Scotland Yard detective, Inspector Japp.

At the time of Christie's writing, it was considered patriotic to express sympathy with the Belgians, since.

- - the invasion of their country had constituted 's casus belli for entering World War I, and British wartime propaganda emphasized and exaggerated the Rape of Belgium.

His first published appearance was in The Mysterious Affair at Styles and his last was in Curtain in the year before Christie died). On publication of this novel, Poirot was the only fictional character to be given an obituary in the New York Times.

-has dark hair, which he dyes later in life and green eyes that are repeatedly described as shining "like a cat's" when he is struck by a clever idea.

-Frequent mention is made of his patent-leather shoes, damage to which is frequently a subject of (for the reader, comical) misery on his part.

-Poirot's appearance, regarded as fastidious during his early career, is hopelessly out of fashion later in his career.

-Among Poirot's most significant personal attributes is the sensitivity of his stomach.

-Suffers from sea sickness, and in Death in the Clouds believes that his air sickness prevents him from being more alert at the time of the murder.

-is extremely punctual and carries a turnip pocket watch almost to the end of his career.

-is also fastidious about his personal finances, preferring to keep a bank balance of , 4 shillings, and 4 pence.

Poirot operates as a fairly conventional, clue-based detective, depending on logic, which is represented in his vocabulary by two common phrases:

- his use of "the little grey cells"

Irritating to is the fact that Poirot will sometimes conceal from him important details of his plans, as in The Big Four where is kept in the dark throughout the climax. This aspect of Poirot is less evident in the later novels, partly because there is rarely a narrator so there is no one for Poirot to mislead.

He is a psychological detective who proceeds not by a painstaking examination of the crime scene, but by enquiring either into the nature of the victim or the murderer. Central to his behaviour in the later novels is the underlying assumption that particular crimes are only committed by particular types of people. 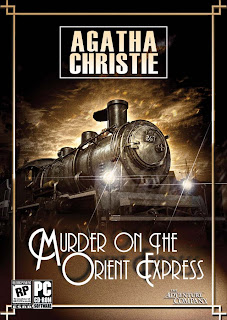 Poirot's methods focus on getting people to talk:

-Early in the novels, he frequently casts himself in the role of "Papa Poirot", a benign confessor, especially to young women.

-Later he lies freely in order to gain the confidences of other characters, either inventing his own reason for being interested in the case or a family excuse for pursuing a line of questioning.

The Poirot books take readers through the whole of his life in .

-from the first book (The Mysterious Affair at Styles), where he is a refugee staying at Styles,

-to the last Poirot book (Curtain), where he visits Styles once again before his death.

-In between, Poirot solves cases outside as well, including his most famous case, Murder on the Orient Express.