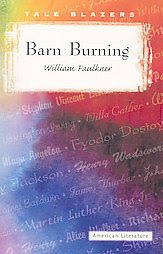 It is a short story which appeared in 1938. The story deals with class conflicts, the influence of fathers, and vengeance as viewed through the third-person perspective of a young, impressionable child. It is a prequel to The Hamlet, The Town, and The Mansion. These three stories make up the "Snopes" trilogy.

comes from the mid-point of its author's career and finds its creator in consummate control of the modernist devices that he, more than any other, had brought to American prose: stream-of-consciousness narration, decadent and even culturally degenerate settings, extended sentences—interrupted by qualifying clauses—that give the effect of continuously suspended or deferred resolution of the action, and images of extreme violence. Northerners found his depiction of the unassimilated South too regional and Southerners found it too harsh and scandalous to be acceptable.

The Faulkneresque, run-on sentences are longish with a lot of commas which separate the subordinate clauses. The setting is the old south, with a third person limited point of view and an episodic plot.

In ‘‘Barn Burning,’’ Faulkner depicts a child, on the verge of moral awareness, who finds himself cut off from the larger social world of which he is growing conscious; this sense of alienation takes root, moreover, in Sarty's relation with his father, who should be the moral model and means of entry of the child into the larger world. Because of his father's criminal recklessness, Sarty finds himself, in the first part of the story, the object of an insult, and he attacks a boy who, in more ordinary circumstances, might be a school-companion or a...

Like “A Rose for Emily,” “Barn Burning” is one of Faulkner’s most frequently anthologized, though its prose is a bit more ponderous than the garrulous first-person narration of “Emily.” Set roughly 30 years after the Civil War, the story focuses on two members of the Snopes family: Ab Snopes, a poor sharecropper who takes out his frustrations against the post-Civil War aristocracy by burning barns, and his adolescent son, “Sarty,” who dislikes his father’s destructive tendencies and ultimately must choose between family and morality. This powerful coming-of-age story is notable for its conscientious prose styling, in which Faulkner mimics the inward turmoil and questions faced by his principal protagonist, as well as its carefully rendered settings of three historical milieus, each of which has important thematic concerns in the story: the sharecropper’s cabin, the planter’s mansion, and the town’s general store. 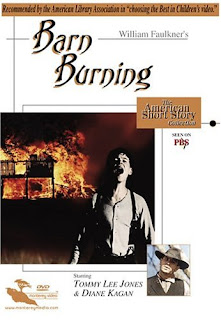 Faulkner incorporated the basic narrative of the story into his novel The Hamlet, though it is told in vastly different language and tone.

The theme of Faulkner's "Barn Burning" is Sarty Snopes's desire to break away from the oppressive conditions of his family life. Sarty gains this freedom when he decides to warn the de because his father's violation of his own sort of morality liberates him from what he calls the "pull of blood," or duty to his family.

Sarty believed in this conviction of his father's. He was prepared to defend his father at the first trial and he hopes that the fires will end, but when Abner begins to set ablaze his next barn, Sarty extinguishes the family ties.

This violation liberates Sarty from the "the old blood which he had not been permitted to choose for himself".

The "pull of blood" is not strong enough to corrupt Sarty, to make him into what he seems destined to become. Together his father's offense and his own youthful sensitivity lead Sarty to his noble decision to warn the de Spain's.

Publicat per Mònica Subirats a 8:21

This has always been one of my favourites...

one of mine as well