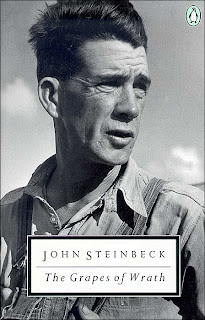 The grapes of wrath
Themes


Kinship: Ma Joad repeatedly stresses the importance of family bonds. If the Joads stand together in familial love, they can have a meaningful and worthwhile life. Ma applies her philosophy to society as a whole, regarding all men as brothers. She welcomes Jim Casy and the Wilsons; she feeds hungry children at a migrant camp even though she has barely enough food for her own family. The example she sets greatly influences her daughter, Rose of Sharon, who, the end of the novel, nurses a starving man with her breast milk.
Unity and Cooperation: Casy espouses unity and cooperation in his attempts to organize the migrant workers into a single voice that demands justice and fair wages. After Casy dies, Tom Joad decides to devote himself to carrying on Casy’s cause. Ma Joad also espouses unity and cooperation, stressing the importance of maintaining family ties and of cooperating with others to achieve common goals. After meeting the on the road, she says, “Each’ll help each, an’ we’ll all git to .”
Love: Casy, a former preacher, believes that loving fellow human beings and acting on their behalf is more important than ranting from the pulpit and warning people to live by the letter of the law. He willingly accepts blame and goes to jail for an offense that he did not commit. And he dies in the service of fellow human beings. Some scholars regard him as a Christ figure: His initials are J. C. and he lays down his life for others.
Perseverance in the Face of Hostility: The third chapter of the novel presents this theme when a truck deliberately runs over a turtle, knocking it to the side of the road. On its back, the turtle reaches out with its legs, grabs onto a rock, rights itself, and resumes its journey. This chapter foreshadows the response of the Joads to the troubles they face on their journey.
Deceit: Landowners and labor contractors lure the impoverished to with handbills promising jobs for everyone. This tactic is a ploy to attract more workers than needed and then to offer the jobs to those willing to accept meager wages.
Prejudice: Many Californians assume that migrants are the lowest of the low and give them a name, Okies, charged with negative connotations. “Okie means you’re scum,” one migrant worker tells Tom.
Greed: Car salesmen take advantage of migrants desperate for transportation to . A business charges traveling migrants for water. Landowners pay migrants very low wages in order to turn a profit.
Hope: Ma Joad never loses hope for a better future. Tom’s decision to continue Casy’s effort to organize workers and Rose of Sharon’s simple act of nursing a starving man both suggest Ma’s hope is not unfounded. Where people help each other, there is every reason to believe that good will come of it.


.Steinbeck uses a variety of writing techniques in The Grapes of Wrath to enhance his presentation. One of them is his somewhat poetic descriptions of nature. They frequently employ personification, as in the following two paragraphs from Chapter which a cunning wind uproots corn (much as the banks and landowners root up the tenant farmers) but later cries and whimpers over the corn (perhaps in mockery).

.......The wind grew stronger, whisked under stones, carried up straws and old leaves, and even little clods, marking its course as it sailed across the fields. The air and the sky darkened and through them the sun shone redly, and there was a raw sting in the air. During a night the wind raced faster over the land, dung cunningly among the rootlets of the corn, and the corn fought the wind with its weakened leaves until the roots were freed by the prying wind and then each stalk settled wearily sideways toward the earth and pointed the direction of the wind.
.....Another technique is the use of omniscient narration in passages in which characters unidentified by name reveal their thoughts in second-person point of view. In the following passage from Chapter 7, Steinbeck employs this technique to reveal the thoughts of a dishonest car salesman:

Watch the woman's face. If the woman likes it [a car] we can screw the old man. Start 'em on that Cad'. Then you can work 'em down to that '26 Buick. 'F you start on the Buick, they'll go for a Ford. Roll up your sleeves an' get to work.

.......A third technique is the use of dialogue that imitates the patois of particular regions and social classes. The following conversation from Chapter 13 takes place after the death of Grampa Joad. Young Al is upset that Grampa died before having a chance to experience the wonders of , especially the grapes that he was going to squeeze over his head in a joyous celebration.
.......A fourth technique is the rat-a-tat presentation of abundant specific details to capture the atmosphere of a particular locale.
Symbolism 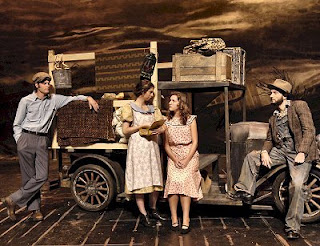 .Among the symbols that Steinbeck uses in the novel are the following:
Dust: (1) Utter ruination of a way of life; death; (2) forces beyond the control of the Joads.
The Turtle: Perseverance of the Joads.
Light Truck That Hits the Turtle: Law officers and others hostile toward the Joads.
Bulldozer: The brute power of the unfeeling, indifferent banks.
Route 66: The lands traversed by Moses and the Israelites on their way toward .
The Thousands of Migrants on the Road: The Israelites in their exodus from .
: False Promised Land.
Rose of Sharon: Fertile and plantable future for the Joads. is a fertile plain along the coast of , and a rose of sharon is a shrub with showy flowers. Early in the novel, Rose is the showy flower; late in the novel, she is the fertile plain full of promise and nourishment for survival. In the Bible, the rose of Sharon is mentioned in Chapter 2, Verse 1, of the Canticle of Canticles (or Song of Solomon).
Publicat per Mònica Subirats a 8:57