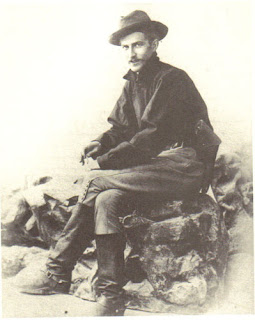 THE RED BADGE OF COURAGE
It is a profile of an inexperienced young soldier undergoing his first experience of battle. “The youth” in the novel, Henry Fleming, makes a journey of self-discovery. But what he learns, and whether he learns, from his experiences is a point that is still debated.
In writing The Red Badge of Courage, nearly thirty years after the Civil War ended, Crane referred to stories of actual battles written in popular magazines.
He wrote about the violence and confusion of the battlefield:
-While some European novelists, such as Tolstoy and Emile Zola, had written about war in a gritty and unsentimental way, most war novels by American writers at the time were simply adventure stories or romances.
-Crane, however, went beyond giving a realistic picture of war:
* He focused on the effects of war on the human mind.
* Crane himself called the novel a “psychological portrayal of fear.”
A second element in The Red Badge of Courage is its ironic tone. Irony involves an awareness of a contradiction between appearance and reality:
-Irony is evident throughout the novel in Crane’s attitude toward both war and courage.
-His realistic descriptions of battle undercut the traditional view of war as a stage for glorious acts of heroism. 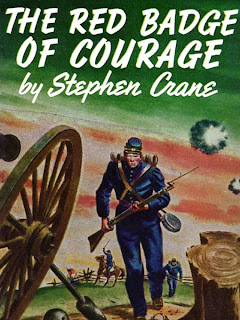 -His descriptions of Henry often call into question the accuracy of Henry’s perceptions about himself.
Although written before the turn of the century, Crane’s novel has more in common with the works of twentieth century writers such as Ernest Hemingway and F. Scott Fitzgerald than it does with works of the 1890s.
Readers see the action through the eyes of just one character, the youth named Henry Fleming:
-Henry is not the narrator of the story but we are inside Henry’s mind throughout the novel.
-We never know any of the other characters from the inside. This approach is known as the third-person limited point of view.
-In the novel, the narrator describes things as Henry perceives them, and Henry’s observations are highly coloured by his emotions.
-At times, Henry’s surroundings almost seem to be an extension of his personality.
-While the descriptions of what Henry sees might seem distorted, they provide a highly accurate picture of Henry’s personal reality. This special kind of realism, which is subjective rather than objective, is known as psychological realism.
Crane presents Henry’s impressions of his surroundings. To convey these impressions, or psychological effects, he uses many images and symbols. For example:
-to Henry the campfires of the enemy across the river look like the “red eyes” of a “row of dragons.”
In other cases, the images suggest the author’s attitude toward the subject of the novel–war. For example:
-As Henry’s regiment marches through the woods and fields, the narrator says, “They were going to look at war, the red animal—war, the blood-swollen god.”
-The abundant visual imagery, which often emphasizes particular colours, contributes to the highly poetic style of the novel.
Publicat per Mònica Subirats a 8:10