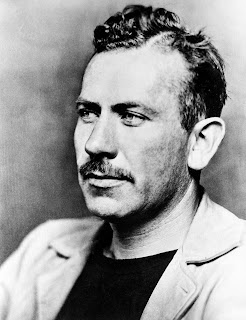 John Steinbeck was born in . His native region of was later the setting for most of his fiction.

He is best remembered for THE GRAPES OF WRATH (1939), a novel widely considered to be a 20th-century classic. The impact of the book has been compared to that of Harriet Beeche Stowe’s Uncle Tom's Cabin. Steinbeck's epic about the migration of the Joad family, driven from its bit of land in Oklahoma to California, provoked a wide debate about the hard lot of migrant labourers, and helped to put an agricultural reform into effect.

During a period, when he was as a watchman of a house in the High Sierra, Steinbeck wrote his first book, CUP OF GOLD (1929). It failed to earn back the $250 the publisher had given him in an advance.

He met Edward Ricketts, a marine biologist whose views on the interdependence of all life deeply influenced Steinbeck's thinking. THE OF (1941) resulted from an expedition in the he made with Ricketts.

PASTURES OF HEAVEN (1932) and THE LONG VALLEY (1938) were short story collections, in which the valley played similar mythical role as the imaginary in Faulkner’s works, based largely on his hometown of . In the novel TO A GOD UNKNOWN (1933) Steinbeck mingled Ricketts' ideas with Jungian concepts and themes, which had been made familiar by the mythologist Joseph Campbell. The novel depicts a farmer, Joseph Wayne, who receives a blessing from his pioneer father, John Wayne, and goes to build himself a new farm in a distant valley. Joseph develops his own beliefs of death and life, and to bring an end to a drought, he sacrifices himself on a stone, becoming "earth and rain". Steinbeck did not want to explain his story too much and he knew beforehand that the book would not find readers. 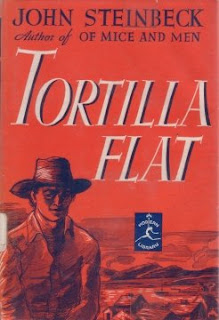 TORTILLA FLAT (1935), brought him wider recognition. The theme of the book-the story of King Arthur and the forming of the Round Table- remained well hidden from the readers and critics as well. However, Steinbeck's financial situation improved significantly for now he was paid thousands of dollars for the film rights to Tortilla Flat.

IN DUBIOUS BATTLE (1936) was a strike novel set in the apple country. The strike of nine hundred migratory workers is led by Jim Nolan, devoted to his cause. Later Steinbeck developed his observer's personality with changes in such works as CANNERY ROW (1945), which returned to the world of Tortilla Flat. The novel was an account of the adventures and misadventures of workers in a cannery and their friends. Its sequel, SWEET THURSDAY, appeared in 1954.

The events of THE RED PONY (1937) take place on the Tiflin ranch in the Salinas Valley, California. The first two sections of the story sequence, "The Gift" and "The Great Mountains", were published in the North American Review in 1933, and the third section, "The Promise",did not appear in Harpers until 1937. With "The Leader of the People", the four sections are connected by common characters, settings, and themes. Through each story, the reader follows Jody's initiation into adult life, in which the pony of the title functions as a symbol of his innocence and maturation. A movie version, for which Steinbeck wrote the screenplay, 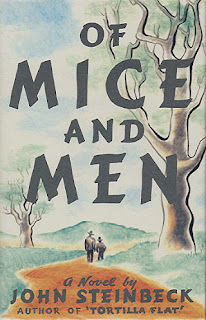 was made in 1949. Among Steinbeck's other film scripts is The Pearl, the story for Alfred Hitchcock's Lifeboat (1944), and the script for Elia Kazan's Viva Zapata! (1952), starring Marlon Brando.

OF MICE AND MEN (1937), a story of shattered dreams, became Steinbeck's first big success. Steinbeck adapted it also into a three-act play, which was produced in 1937. George Milton and Lennia Small, two itinerant ranchhands, dream of one day owning a small farm. George acts as a father figure to Lennie, who is large and simpleminded. Lennie loves all that is soft, but his immense physical strength is a source of troubles and George is needed to calm him. The two friends find work from a farm and start saving money for their future. Annoyed by the bullying foreman of the ranch, Lenny breaks the foreman's arm, but also wakes the interest of the ranch owner's flirtatious daughter-in-law. Lenny accidentally kills her and escapes into the hiding place that he and George have agreed to use, if they get into difficulties. George hurries after Lenny and shoots him before he is captured by a vengeful mob but at the same time he loses his own hopes and dreams of better future.

Publicat per Mònica Subirats a 7:44