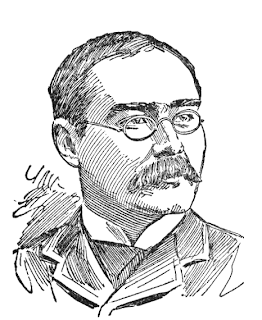 The Jungle Book (1894) is a collection of stories written by Rudyard Kipling, which were first published in magazines.
The tales in the book (and also those in The Second Jungle Book which includes five further stories about Mowgli) are fables, using animals in an anthropomorphic manner to give moral lessons. The verses of The Law of the Jungle, for example, lay down rules for the safety of individuals, families and communities.
The Jungle Book is one of the works for which Rudyard Kipling is best remembered, and it falls in line with works like Flatland and Alice in Wonderland (which offer satire and political commentary, underneath the genre title of children's literature). Likewise, the stories in The Jungle Book are written to be enjoyed by adults as well as children--with that depth of meaning and symbolism that delves far beyond the surface.
The Jungle Book as a classic is from the 19th century, but still enjoyable in the 21st. Walt Disney’s studios made the stories it into film and a cartoon series for children and families. Children have thus been able to know the stories before reaching a reading age and can then enjoy them in a different facet as well.
Relationships and events related in The Jungle Book are important to any human being, including adult men and women, with or without families:
- While the tales can be read, or children may listen to them from an older reader,
- these stories need to be re-read later, in high school, and again in later adult life.
- They are enjoyable in every subsequent reading and the longer one lives, the broader is the frame of reference one has against which to draw the stories into perspective.
The Kipling stories offer a marked perspective of a reminder of human origins and history as well as animal. As the Native American and other Indigenous Peoples often state: All are related under one sky. The stories can be shared inter-generationally, with interpretations shared by all:
- They are important because they address the prime relationships in one’s life – family, coworkers, bosses – and everyone’s relationship with Nature.
- For instance, if a boy is raised by wolves, then wolves are his family until the last one dies.
- The themes of The Jungle Book revolve around noble qualities such as loyalty, honour, courage, tradition, integrity, and persistence. These are good to discuss and ponder in any century, making the stories timeless.
Other readers have interpreted the work as allegories of the politics and society of the time.
The best-known of them are the three stories revolving around the adventures of an abandoned 'man cub' Mowgli who is raised by wolves in the Indian jungle. The boy is raised by wolves in the Indian Jungle with the help of Baloo the bear and Bagheera the panther, and then has to fight the tiger Shere Khan.
As with much of Kipling's work, each of the stories is preceded by a piece of verse, and succeeded by another. 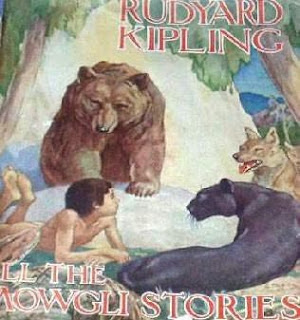 The stories take place in a tropical jungle, somewhere in the British colony of India. These two terms, jungle or forest, are used interchangeably throughout the book. The jungle is the setting for all the Jungle Book Stories except for The White Seal and Servants of the Queen.
The law of the jungle represents the unwritten laws that govern the civilized creatures, including the wolves. For instance, it specifies that no creature should kill for sport, only for hunger. These laws are an important principle in all of the stories, except for The White Seal and Servants of the Queen.
The Monkey City is an elaborate ruin, reminiscent of Angkor Wat, where the wild monkeys, the "Bandar-Log," live.
Like Aesop's Fables, the stories of The Jungle Book all seem to have a moral.
Kipling shows how Mowgli, Toomai, and various animals confront danger, learn to overcome it, and in the process become aware of the diversity and meaning of life. The central characters, whether they be human or animal, learn much about the evil of the jungle and of human beings, but they also learn about goodness and develop their own values.
Order and wisdom are predominant values found among the animals.
Kipling's narrative reflects nineteenthcentury attitudes in its depiction of nature as possessing a moral order that is superior to the human order. While ignorance and violence abound in the jungle, these traits in humans seem much worse, because humans have the power to choose to do good or evil
One of the book's main themes is Mistrust of People Who are Different:
The first three stories in The Jungle Book, about half of the book, deal with Mowgli's boyhood and his adventures growing up amidst the wolf pack:
- From the very beginning, when he is presented to the wolf council as an infant, the reader feels the distrust and suspicion of the other wolves toward him.
- These feelings among the wolves are fanned by the cunning and devious Shere Khan, the tiger.
- Although Mowgli is allowed to grow to adolescence, the reader senses the confrontation that is to come.
- Eventually, he is turned out of the pack, not because he did anything wrong, but because he is different from the wolves.
- Having been expelled from the pack, Mowgli tries living with the humans in the small village just outside of the jungle.
Themes and Characters
As in beast fables, Kipling's characters represent certain traits, qualities , and values. For example:
1. the wolves:
- personify order.
- They have a code of law developed by a council that determines every aspect of life, from the rearing of young to interaction with the other animals.
- But the wolves are also capable of great compassion, e.g. Mother Wolf:
· loves and protects Mowgli
· and fights for him to be accepted by the other wolves. 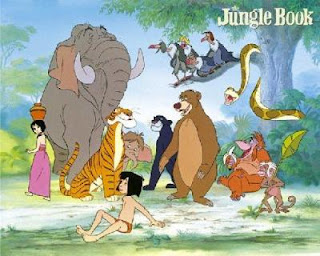 2.The monkeys are the very antithesis of the orderly wolves:
- they are some of the most ignorant and lawless creatures of the jungle and are despised by the other animals.
- Mowgli's friends— Bagheera the panther, Baloo the bear, and Kaa the rock python—come to his rescue.
Whatever one may feel about Mr. Kipling's other work, about his rampagious imperialism, his self-conscious swashbucklerism, his pipe-clay and his journalism, his moralistic breeziness and his patronage of the "white man's burden," one cannot help admitting that the Jungle-Book is one of the immortal children's tales of the world.
The best of all children's books, "Grimm's Fairy Tales" , takes no deeper hold upon the youthful mind. Mr. Kipling's genius which in his other work is constantly "dropping bricks", and running amuck through strenuous banalities, rises in the Jungle-Book to heights of poetic and imaginative suggestion which will give him an undying position among the great British writers.
HISTORICAL INFLUENCES
Women's Rights
The want for women’s equality and suffrage had started when Kipling wrote The Jungle Book.
Kipling gives Mother Wolf a lot of power, :
- being able to scare away a tiger that not even Father Wolf could.
- Father Wolf looked on amazed since he had almost forgotten the days.
· when he won Mother Wolf in fair fight from five other wolves,
· when she ran in the Pack and was not called The Demon for compliment’s sake.
- Shere Khan might have faced Father Wolf, but he could not stand up against Mother Wolf, for he knew that where he was she had all the advantage of the ground, and would fight to the death.
British Empire
The British Empire was present during Kipling’s time.
Although Kipling didn’t always agree with its actions, he approved of its existence. Kipling greatly valued order and law, which is a significant theme in The Jungle Book:
- The animals follow the Law of the Jungle, which governs many aspects of their life and keeps peace between animals.
- When Shere Khan, who doesn’t listen to the Law of the Jungle, takes over there is conflict not just between wolves in the Pack, but between all animals.
- Law and order is essential in maintaining a civilized society like what Kipling presents.
Political Views
Kipling was politically conservative and hated anarchists.
Kipling shows his dislike for anarchy in The Jungle Book by making all of the animals value order and law except the monkey people:
- Kipling makes the monkeys or anarchists the most hated creatures in the jungle but recognizes that they have power.
- When the monkeys capture Mowgli, Baloo worries about Mowgli’s safety.
“Toomai of the Elephants” makes many references to the First Afghan War and the British 1868 Expedition to Abyssini.
In "Servants of the Queen", Kipling provides a description of a military camp. This whole story is based on his experiences in this event.
Publicat per Mònica Subirats a 10:13