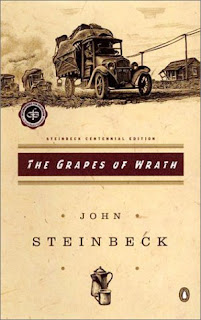 The Grapes of Wrath is frequently read in American high school and college literature classes. A celebrated film version, starring Henry Fonda and directed by John Ford, was made in 1940; however, the endings of the book and the movie differ greatly.

Set during the Great Depression, the novel focuses on a poor family of sharecroppers, the Joads, driven from their home by drought, economic hardship, and changes in the agriculture industry. In a nearly hopeless situation, they set out for 's along with thousands of other "Okies " in search of land, jobs, and dignity.

While en route, they discover that all of the roads and the highways are saturated with other families who are also making the same trek, ensnared by the same promise. As the Joads continue on their journey and hear many stories from others, some coming from , they are forced to confront the possibility that their prospects may not be what they hoped. This realization, supported by the deaths of Grandpa and Grandma and the departure of Noah (the eldest Joad son) and Connie (the husband of the pregnant Joad daughter, Rose of Sharon), is forced from their thoughts: they must go on because they have no choice--there is nothing remaining for them in .

Upon arrival, they find little hope of finding a decent wage, as there is an oversupply of labor and a lack of rights, and the big corporate farmers are in collusion. The tragedy lies in the simplicity and impossibility of their dream: a house, a family, and a steady job. The final act is said to illustrate the spontaneous mutual sharing that will lead to a new awareness of collective values. 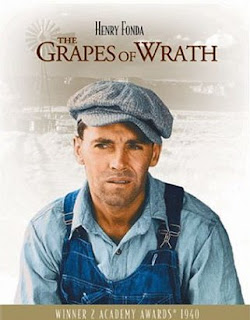 After the First World War turned European farmlands into battlefields, American agriculture prospered. To improve productivity, the agricultural industry borrowed money for machinery and more land. When resumed production after the war, American farm owners received far less for wheat, corn, and other crops. Consequently, they had to struggle to repay loans. Banks began to seize the property of defaulting landowners and evict sharecroppers living and working on the farms. After the stock market crashed in 1929, the world economy entered a deep depression. On farms that escaped foreclosure, financial prolems worsened. Meanwhile, parts of , , , , and experienced widespread soil erosion as a result of overplanting that stripped away grasses needed to hold the soil in place. Then, between 1934 and 1937, drought and wind turned these agricultural heartlands into what a newspaper called a "dust bowl." Banks seized more farms, leaving hundreds of thousands of sharecroppers and other farm laborers without work. Because these workers had little or no training in other occupations, their prospects for new employment were severely limited. As a result, many of them moved west, to , responding to handbills advertising for field workers. Farm jobs in were thought to be plentiful partly because of its favorable climate year round. The fictional Joad family, on whom

Steinbeck’s novel centers, enters the stream of job seekers bound for full of hope–and little else.

The narrator tells the story in third-person point of view. Generally, the narrator is omniscient, or all-knowing, seeing and reporting the thoughts of the characters as well as witnessing and reporting the action. At times, however, he reports only the action without revealing the characters' thoughts. The narration alternates between chapters centering on society, nature, universal themes, or background information and chapters centering on specific people and places. For example, Chapter 1 presents information about the the Dust Bowl and society's reaction to it. Chapter 2 centers on Tom Joad and a truck driver who gives Tom a ride home after his release from prison. Chapter 3 centers on a turtle that exhibits the kind of perseverance that sustains the Joad family during their journey west. Chapter 4 focuses on Tom and Jim Casy, a former preacher who tags along with Tom. Chapter 5 presents general information on how banks evict tenant farmers. Chapter 6 zeroes in on Tom, Casy, and Muley Graves at the abandoned Joad homestead. The narration continues to alternate chapters in this way, giving the novel a balanced structure.


Publicat per Mònica Subirats a 7:48