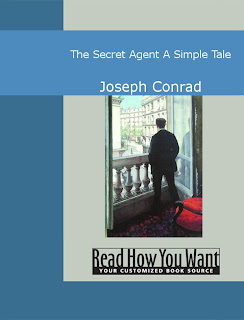 "THE SECRET AGENT"
Conrad begins the novel by introducing the characters and describing them. After the description episode, he begins the main action by planting Mr. Verloc in the embassy to take on a new assignment or face termination.
Upon receiving the new assignment, the actions of Mr. Verloc, in preparation for execution of a plan, contribute to the rising action.
Among the conditions existing, the relocation of Winnie’s mother, and Stevie’s trip to see Mi chaelis were two major contributors.
The indirect news of Stevie’s death, and the murder of Verloc sustain the climax and put an end to the increasing excitement of the mission of which Verloc was involved.
Falling Action
In response to the climatic action, Winnie is forced to flee, and happens meet with Comrade Ossipon in the process.
Ossipon concludes this episode with the abandonment of Winnie.
After being abandoned, Winnie takes her own life, placing a conclusion on the novel.
Themes :
Alienation :
The theme of alienation is found principally in the relationship between the city and citizens thereof:
- Those who dwell in the city feel alienated from it, causing a degree of corruption in their lives.
- This is particularly a pparent in the Commissioner’s journey. ‘His descent into the street was like the descent into a slimy aquarium from which the water had been run off”.
Breakdown of Communication :
After the death of Stevie, Mr. and Mrs. Verloc were unable to communicate with each other in any intelligible fashion.
This failure to communicate leads to the destruction of relationships, as seen in Mr. and Mrs. Verloc lives.
Death :
Throughout the course of events, death seemed to be a minor theme, rearing itself only in response to the development of the plot.
The reader is forced to deal with the death of several main characters including Stevie, Mr. Verloc, and Mrs. Verloc.
Techniques :
Foreshadowing is used to create unity. It is present throughout the novel in many places, such as:
- Mrs. Verloc being angry if Stevie is hurt,
- and her killing Mr. Verloc after Stevie’s death is discovered.
- Specifically, it can be seen when the story of Stevie playing with fireworks is given, foreshadowing the bomb explosion.
Repetition allows for emphasis to be placed on a specific set of variables.
This technique makes clear to the reader the consequences for a given action or set of actions:
- Winnie’s relationship to Stevie is mentioned time and time again through the course of the novel to enforce her action when Stevie dies.
- Phrases such as, "She could not bear to see the boy hurt," (47) are found throughout the novel.
Flashback enables Conrad to further explore the possibilities of unity through the work by uniting the past with events yet to come.
This technique is closely linked to foreshadowing, and each is used as a catalyst of sorts:
- Chapter eight fully incorporates flashback technique, as is evident in the very first sentence of the chapter.
CONCLUSIONS
Conrad's extremely ironic tone throughout "The Secret Agent" emphasizes a pessimistic attitude towards society and individuals.
Conrad's perspective is reflective of a society still reeling from the traumatizing social effects of industrialization.
London's drab streets and barren ugliness reveal the futility of life, and impersonal fate's destruction of individuals further reveals life's emptiness.
the city of London represents the archetype of death, "a modern underworld" where the personal self is annihilated. In such a city, neither life commitment nor its opposite, despair, have any purpose, "nothing seems worth saving".
Conrad's pessimistic view of society envelops each character's personal relationships. Throughout "The Secret Agent",the usage of geometric imagery shows the ripple effects of evil within society on the micro level.
Critics essentially agree that the novel's ironic tone conveys pessimism towards society and relationships, but they differ over Winnie Verloc's morality. The central character of the novel, 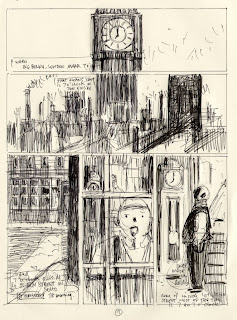 many critics consider her a tragic heroine due to her sacrificial role. Conrad himself seems to support this interpretation in his preface to the 1920 edition of the novel.
Other critics see Winnie as a darker character. Some state that Winnie is as impenetrable as her mysterious husband because of her utter lack of curiosity. Others consider her as evil as her husband, an archetypal "femme fatale".
Though Winnie has some positive characteristics, such as a maternal love towards her helpless brother, she is an essentially negative character:
- Her passive obedience to social conventions makes her mostly responsible for:
· the death of her brother,
· her murder of her husband,
· and her subsequent suicide.
- The complex morality of Winnie Verloc is the central question of the novel. Despite a surface appearance of nicety, Winnie is the most chilling character:
· Winnie is a stereotypical Victorian wife,
· and Conrad uses her magnetic attraction towards destruction to criticize women who obey unreasonable social expectations.
· Conrad's use of a biblical allusion to Satan warns readers:
1. that the Victorian wifely ideal dehumanizes women
2. and that women passively following Victorian social conventions by sacrificing all of their dreams and relationships for others, not communicating with their husbands, and marrying primarily due to economic concerns will never reach their full potential.
· Winnie's greatest character flaw is her passivity:
1. Her passive philosophy of life causes her to conform to Victorian social expectations of self-sacrifice, silence, and a marriage made in the courtroom, and this passivity stunts any moral development.
2. Winnie's obedience to her suffocating societal expectations leads to her dehumanization.
There is no loving companionship in the Verloc's socially-defined relationship largely due to an utter lack of communication:
- Mr. Verloc and Winnie never explain themselves to the other, and throughout the novel, their ambiguous relationship lumbers towards disaster.
- They each have married with hidden pasts, for both have had previous relationships that utterly failed:
· a female spy betrayed Mr. Verloc
· and Winnie walked away from the person she truly loved.
- Neither shares significant events in their life with the other.
- Winnie's lack of communication with her husband is due to her passivity. She bases her relationship with him on the simplest route, living like the typical Victorian wife.
Victorian society expected sacrifices of women, and a lack of openness between husbands and wives.
In light of this, it is unsurprising that their culture frequently viewed courtship and marriage from a legal, unromantic, perspective:
- Charles Dickens's "The Pickwick Papers" is a humorous novel about an engagement gone awry, resulting in a lawsuit,
- but Pickwick's troubles were not uncommon in Britain since if an engagement was broken, women frequently sought retribution in a public court of law.
- men had to keep their promises with great strictness. Even if it meant alienating family or enduring an unhappy union, a man was expected to fulfill his contracts.
- Winnie chooses a marriage based like a legal contract, which was typical in Victorian society.
· This approach requires much less emotional investment and work than the companionate ideal (which is entirely impossible for the Verlocs).
· Winnie's contractual marriage due to her passivity leads to her family's destruction, but requires less immediate effort than a marriage based on any romance.
Conrad's moral, missed by his contemporary readers, still rings true today. Passively accepting inhuman expectations will dehumanize you.
Publicat per Mònica Subirats a 7:59